Blog Keep up to date with all the latest news about La Boqueria products.

Chorizo. It is one of the most delicious sausages in the world. They were born in Spain after the conquistadors returned from the New World with red peppers. Sweet red peppers were dried – both under the sun and over smoke – then ground to make a deep-red powder called pimentón. Aromatic, but not spicy hot, pimentón contains naturally occurring preservatives to deter bad bugs thriving –something important in the days before refrigeration. Today, it is the unique flavour of pimentón that unites this diverse family of chorizos that spans the Iberian Peninsula-

While it is said that there is a different chorizo recipe for every Spanish village (and a different chouriço for every town in Portugal), they almost always contain a mixture of pork meat and fat, salt, garlic and pimentón. Traditionally, making chorizos was a way of preserving a pig that had been fattened up on summer bounty over the lean cold months of winter. Even today, there are many villages in Spain where the family pig is killed in ‘la matanza’, which translates as ‘the killing’.

Traditionally the hind legs were made into jamón and sold to rich people. The front legs were cured and made into paleta. While the loin was made into lomo, much of the rest of the pig was cut up into small pieces and mixed with salt, garlic and pimentón to make sausages. Some of this sausage stuffing meat, ‘el picadillo’ de chorizo, was cooked to feed the workers who helped with ‘la matanza’. This was also a way to make sure there were enough salt and other seasonings in the chorizo. Some of the sausages were stuffed into narrow skins, and used for grilling within a few days or so. The rest were cured to last.

While it is possible to import jamón from Spain, it is not possible under Australia’s strict quarantine laws to import sausages. This has seen a pent up demand by Australian diners, met by a rapid rise of Australian manufacturers of authentic Spanish style chorizos.

The types of chorizo are chorizo semi curado (semi-cured) and the curado (dry aged). The chorizo curado is the classic firm sausage that is as close as you can get to Spain’s version of the salami. It has undergone fermentation that drops its pH, giving it a clean acidic finish and a long shelf life. It is also air-dried, making it firm and slightly chewy. (In some parts of Spain, particularly the rainy north, chorizo is slowly dried over oak fire smoke – something that some local makers do as well). Chorizo curado is the chorizo you put on the wooden board, take to it with a big sharp knife and cut slices off to serve as a tapa with beer or wine. It doesn’t get more complicated than that.

The chorizo semi surado is for cooking and needs to be cooked before being eaten. The skin is still slightly soft, yet it has good shelf life in the fridge. This is the sausage the Spanish put in their slow cooked stews, such as cocido madrileño or fabada asturiana. It is the chorizo you use to cook with eggs to make huevos con chorizo. It is the chorizo you cut up and put in a dish with rough diced potatoes and put in the wood fired oven. This is the chorizo you slice open lengthways and gently grill or fry. The colour and aroma of pimentón dissolves into the fat – which renders out when the chorizo is cooked. This is perfect when you want the beautiful deep red colour and warm bright flavour to permeate a dish such as potatoes cooked with chorizo. When you’re grilling a chorizo, you need to treat it gently so as to heat it up without releasing all that delicious flavour and aroma.

Chorizo in all its forms was never meant to be eaten alone. This is a simple and elegant food that is best enjoyed with family and friends, perhaps with a glass of tempranillo or some decent red from La Rioja. 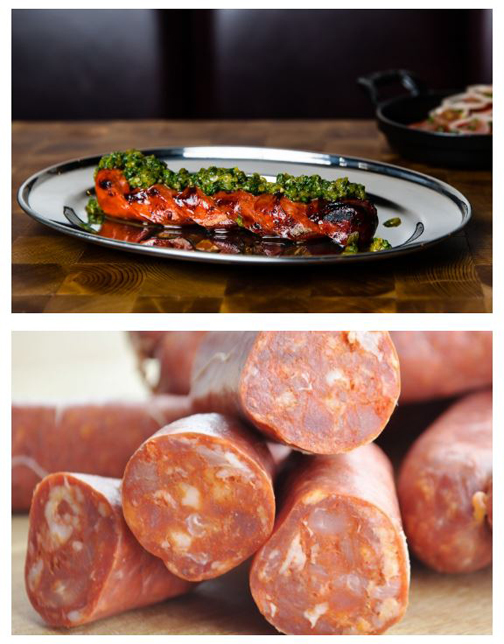 Emile Gomez, founder of La Boqueria Embutidos (smallgoods) and proud Catalan, collected traditional recipes from family and friends in Spain before bringing them back to Australia.
La Boqueria now produces over 50 products using only the best quality Ingredients.

What motivates you to do what you do?
To be able to make products that are close to their original style, to follow methods that were developed and perfected by artisans, this is a beautiful way to recreate a perfect memory of my history.

What’s unique and special about what you produce?
We don’t stray too far from the perfection that was created in Spain. We make products that Spaniards would be proud of. We only use the highest quality ingredients and strict artisan methods and ideals.

What’s your favourite product and why?
They all are. I love Longaniza Oscura because it came from an extraordinary chef in Barcelona who reinvents tradition. But our humble chorizo surprises me by taking me back to Spain each time I taste it.

What’s one of your most memorable food experiences?
Sitting on a stool at 6 years of age, my grandmother carving a piece of pigs cheek; grilling it by the open fire on the end of her carving knife, and passing it to me by the fireplace.

How and when did you start? What’s Your Story?
I cooked in professional kitchens on and off in my 20’s. I ran a range of companies that always seemed to point me back to Spain. About 20 years ago, I began to import and travel back to Spain. Nomad Distribution grew from that to what it is today.

What are you looking forward to in the future?
We have a few projects, some more long term than others. But the one most recent is a new production facility to focus on nitrate-free free range products.

What are you most proud of?
My team, they are exceptional and believe in the high ideals we strive for. They are the backbone that allows us to make the industry recognised products that are award winning.

What is the most interesting comment someone has made about your produce?
“I normally don’t eat pork, but I make an exception for La Boqueria products, those I wouldn’t pass-up on” 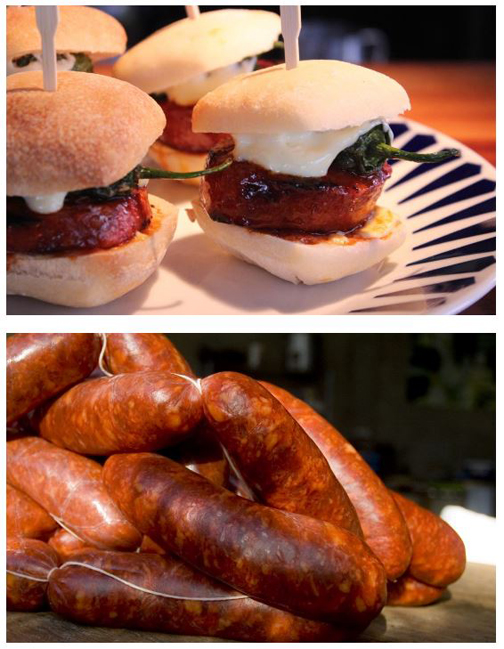 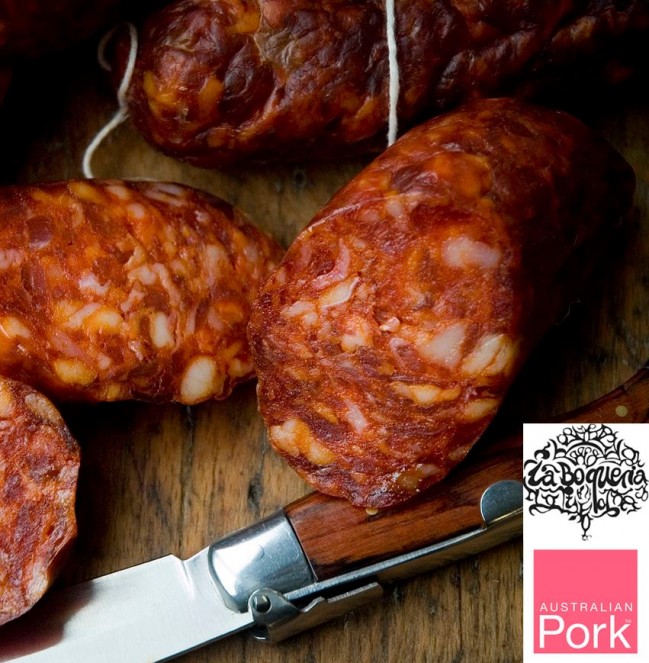 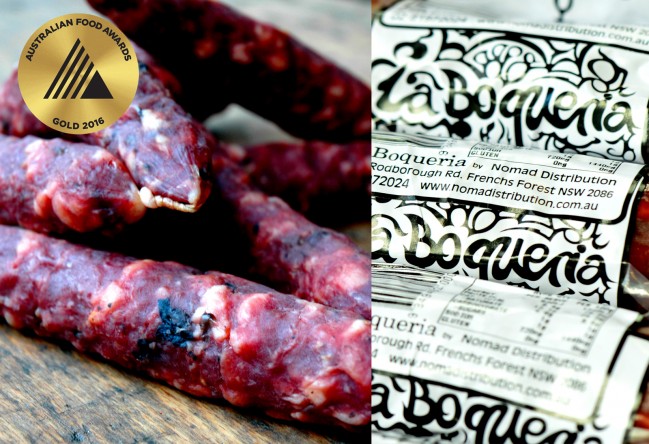 We've done it again!
Our Class SMG001 - Salami entry of Bosquito,
has picked up a GOLD medal in this year's RASV Australian Food Awards! 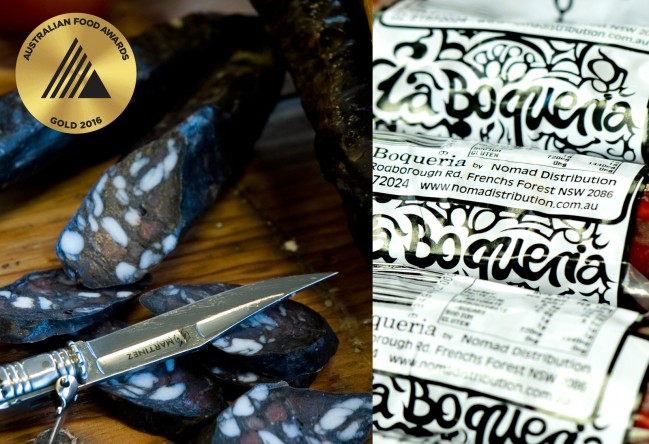 We've done it again!
Our Class SMG001 - Salami entry of Longaniza Oscura,
has picked up a GOLD medal in this year's RASV Australian Food Awards! 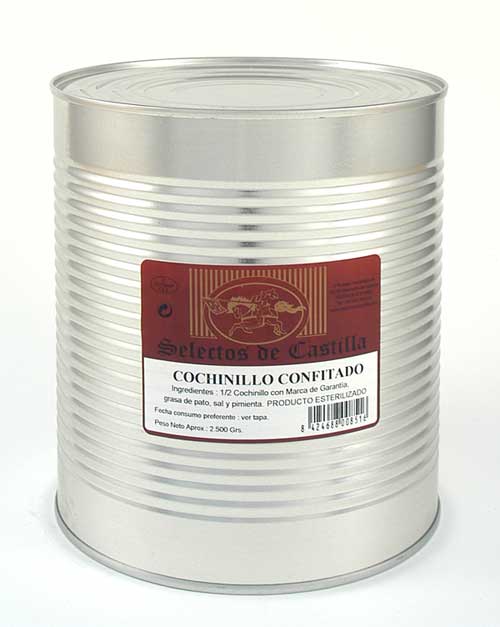 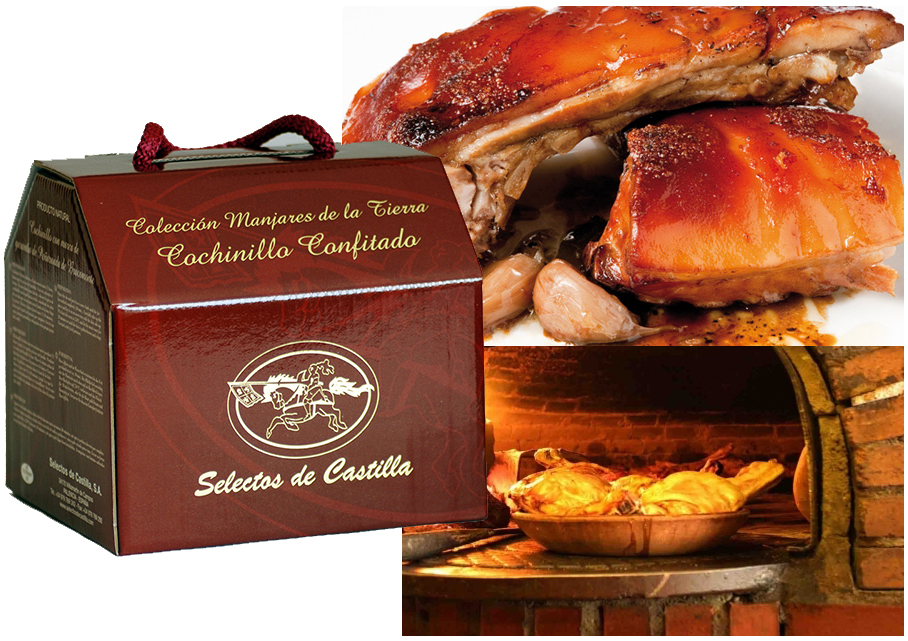 From the tradition of the oldest restaurant in the world situated in Madrid - Botín, who have been serving cochinillo (suckling pig) since 1725. We are proud to be the first in Australia to bring you Cochinillo from Segovia.

SUCKLING PIG D.O SEGOVIA  -The suckling pigs are born and raised by their mothers in big stable boxes where the small suckling pigs can move freely with enough space to play with the others in the litter and develop through physical activity. The piglets’ only nutrients are in their mother’s milk. The sows give birth after 114 and 116 days with litters between 10-16 piglets. No medical prevention, only a dosage of iron, given orally when they are born. No mutilation has occurred (no castration, no tail cutting etc). The suckling pig are slaughtered between the 21st and 28th day and its average weigh is between 4,5 to 8Kg (Only the D.O Segovia).

Open the tin and put it in a water bath until the fat has melted completely (30 min.). Carefully take up the piece and lay it on an oven tray with the skin side up.

Pre heat the oven to 250 ºC and let the meat roast for 20 minutes or until the skin is golden brown and crispy.  Garnish with fried potatoes

We will be at Fine Food Australia 2015- Sydney Olympic Showground - STAND W26 – Sep 20 - 23
Come and visit us to taste some award winning Artisan Charcuteria by La Boqueria.
We will also be featuring Spain's